It is said the forebears of our realm came from a far eastern continent landing originally as immigrants, First Ones without land or title. what they did bring was their culture. The culture practiced by the native mortals and the immigrant First Ones merged together to what we see today.

In the 4th year of the current age the Suchiru Clan lead the charge to creating our realm, giving Tetsuyama a voice, land, and recognition as a realm. The Suchiru clan dominated Tetsuyama till the end of the 5th year in the current age when The plague known as slumberblight swept through the land infecting most of the royal family as well as many other clans inside the realm. this left few First Ones to lead and as such much the land went without local rulers. As princess Suchiru Aiko fell to slumberblight, and with no healthy heir left, Sadamune Ishida was elected the new Prince, by the few remaining First ones. Andew Darion rose through the ranks as Sadamune's adviser first becoming a count, then duke, then named the successor of Tetsuyama when Sadamune Abdicated. A terrible war began soon after with the Sarantian Empire where the Naginata clan betrayed Tetsuyama and joined the Sarantians. The War costed not only much of the original homeland of the realm but the lives of many nobles including Prince Andew. His Father Marthus succeeded him. When the Kye dynasty of Ryne fell to slumberblight. The darion family assumed control and forged the realm to an empire.

Tetsuyama has close ties to the Imperium of Aelwyn and Hawks, While maintaining friendly relations with its neighbors. Its chief rival and adversary is The Archonian Dominate. 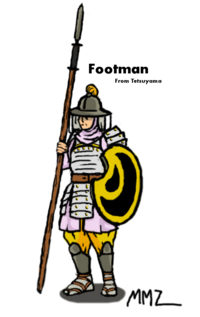 An average Solider of Tetsuyama 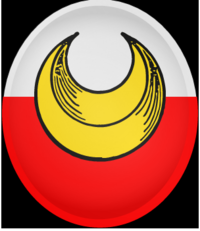 The Family Crest of the Darion Family
Retrieved from "http://wiki.maffans.org/index.php?title=Tetsuyama&oldid=2360"