From Might & Fealty Fan Wiki
< Manual
Jump to: navigation, search

Dungeons within Might & Fealty are a type of player activity in which the game itself switchs from it's tradition large-scale turn-based strategy game to a much more close-quarters quasi-real-time adventure game, hit points included.

It should be of note, that this page, and any sub-pages, have been constructed purely by the fan-base, as Dungeons are intentionally not mentioned in the official game manual.

There are a few things you need to know about dungeons however before you can go explore them. First, you need to actually find one. Secondly, you'll need to put a team together.

There are presently four types of dungeons you can find: Caves, Wildernesses, Ruins, and Dungeons. Each of these have their own unique map icon, however it will not be visible to you until you are able to locate it. This is done by following any rumors that appear on your character summary page (the one that loads immediately after you click play). These rumors will either give a direction, state one is nearby, or tell you precisely where one is, in that order depending on how close you are. While it is possible to do this on your own, this process is made far faster my coordinating the actions of several characters, and systematically triangulating the origin of a rumor.

Dungeons are strictly a group activity. A minimum of three First Ones are required to perform a dungeon run, with a maximum party size of eight.

Troops do not play into these, nor do entourage members. Only the first ones themselves are counted. The more party members, the tougher the dungeons get and the higher the reward. 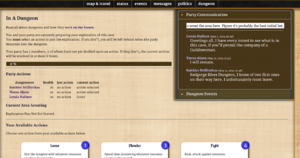 The first thing you'll notice after you've got your three-plus individuals is that you've landed at a page unlike any of the other ones in Might & Fealty. And you've apparently gained a health meter. And a chat box, along with a brand new list of actions and a party listing. And you have completely lost access to your regular actions menu, so if someone happens across you, well, you're probably defenseless. But there's all that gold in the dungeon, so it's probably worth it. Of course, this is only really an issue if anyone actually knows where you are.

Dungeons, like any dangerous activity, are one that requires coordination. Sure, you can leave your party fighting the monsters while you run away with the loot, but if they live they probably won't be too happy with you. That said, you only know what you're doing, and what your party has done. It's entirely possible that they may say they're going to do one thing, but then decide to do another.

Since the topic of dungeons is quite extensive, subpages were created that contain a significant amount of information. These contain both objective observations and subjective interpretations.