Rothrik de Villiers is the sole member of House de Villiers, and sailed to Ascalon alongside Prince Richard of Arescod. Whilst not entirely Ascalonian and with unclear origins, House de Villiers holds the Kingship of the Kingdom of Ascalon. 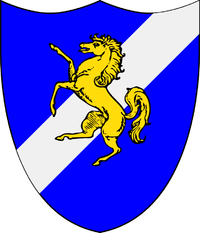 Prince Richard of Arescod, along with his retainers and friends had travelled on a pilgrimage to distant lands, and found themselves in the midst of a search for an ancient relic. It was on this search that the first mention of a “House de Villiers” was ever recorded. Rothrik de Villiers, who happens to be the only member of this House, ended up deciding to accept the Prince’s offer of becoming an Ascalonian noble, and after their work was done they sailed to the forested Kingdom.

The nobles that returned with the Prince became known as the Wakesworth Lords, and whilst they were a relatively close-knit group, competition for favour and renown was fierce. After being assigned joint command of forces in the campaign across the Sirion, Rothrik rose to prominence amongst these lords, and after a well organised and successful campaign and the subsequent land reforms arranged by himself and Baron Lyonell Vintroth, he became a very close advisor to the Prince.

Rothrik de Villiers was evidently of noble origin, yet his personal preferences contrasted wildly with the rest of the Ascalonian nobility. Despite his relative youthfulness, he had grown to thoroughly dislike Ascalonian courtly affairs, seeing these chivalrous knights as nothing more than narcissistic duellists putting on a front to impress the ladies and overstate their own worth. As time went on he felt that many injustices plagued the realm, and frequently argued with, berated and outright insulted higher nobles and even Dukes of the realm, always doing so in a way that would indirectly benefit the Prince’s position. At public events such as the northern wedding at Slumberstone, he stood alongside the Prince, making snide remarks and mocking the city, those due to be wedded and the Duke of Misthelm himself who was hosting the wedding. Whilst this was certainly not proper for a noble, Rothrik’s unique charm won him much favour with his peers, and perhaps more importantly, both Prince Richard and the Duke of Falconreach.

When the nobles of Wakesworth had succeeded in their aims of making Richard their King, the Kingdom fell into a lull, with King Richard growing tired of the emptiness left in the wake of near-civil war. Richard slumbered, and Rothrik was elected as the humorously named Il Duce of the Wakesworth Lords, leading them and taking control of the capital and the Royal Duchy of Arescod. Following the secession of Misthelm and the Arnheim conflict with the Grand Fate, the Regency of Ascalon, nigh worthless at the time, was handed to Rothrik, who decided that he would right the wrongs of the past. During the Arnheim conflict, a series of natural disasters caused by a self-proclaimed “death mage” hailing from Idraei and the Isles caused the instantaneous death of all of the well trained and equipped troops in Ascalon’s major centres, causing many nobles to outright slumber through their rage and making the military completely inconsequential. Without the vast reserves of well armed veteran troops enjoyed by other realms, Ascalon was forced into having a military comprised of hastily trained levy troops in what was already a poor Kingdom with a severe lack of natural resources. This problem became an issue which would last in perpetuity.

Rothrik attempted to mend relations with Ascalon’s allies in the Isles, and ultimately found plenty of common ground with those that Ascalon had been fighting and arguing with just months before. The good-willed nature of these talks seemed to be a blessing at first, yet ultimately became a curse. Ascalon received no material support for his efforts, and Rothrik was left empty handed with some friendship when he really needed an army. He continued with his plans for internal reform, and managed to raise an army from scratch for the Havengate Campaign, in which an army of untested soldiers and commanders defeated the Lowlands and retook the lands of the former Duchy of Misthelm.

After this, the Regency finally began being seen as a success, and Ascalon earned its place amongst the world’s most prominent powers. Rothrik continued as Regent, and continued pursuing Ascalonian interests ahead of his own. He acted on behalf of the Kingdom, and Ascalon became increasingly involved in the world’s affairs, growing in size and influence at every turn. Ascalon intervened in the Eldamari civil war, and both reaffirmed its alliances and signed new ones, it pressed its interests on all fronts and became increasingly stronger.

To this day, Rothrik de Villiers remains the only member of House de Villiers, and is heavily involved in Ascalonian affairs as its King. The House’s exact origins remain unclear.