The Kingdom of Ascalon

The Kingdom of Ascalon is a realm of the second generation of realms, those created right after the guided start of Might & Fealty. It can be vaguely identified as a blend of several European realms, with clear English, French influences, aswell as some similarity with the Holy Roman Empire.

Founded by the House of Arescod, The Kingdom of Ascalon is populated by a civilised folk. The lush and densely forested area they live in allowed them to develop nicely and due to the Kingdom of Rathgar to the North and the Erstes Imperium to the South aswell as the Fading Isles in the West they grew into a relatively cohesive folk. They are very loyal to themselves and value their independance highly.

The First Ones who rule over the mortal peasants in this area share a large feeling of unity and are separated in several large noble houses with good relations to eachother. While the mortals obey the First Ones, they do not want to have too much to do with them either. They are seen as protectors and rulers, and are respected because they uphold the independance of the people.

Ascalon has a civilised culture in which tradition, honour and prestige are important social currencies. They uphold the values of knighthood and have a clear morale of what is and what is not acceptable. Because of this they are not a tremendously warlike people, but they have a quite militaristic attitude because of their vulnerable position between the Kingdom of Rathgar and the Erstes Imperium. 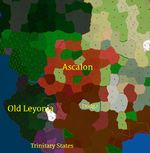 Ascalon on 15-23-1.
Retrieved from "http://wiki.maffans.org/index.php?title=Ascalon&oldid=2701"
Categories: